Back to school! To our first contact, we have learned how to say Bonjour (good morning) and Au revoir (bye bye).

We introduced the nursery rhyme of “it’s the whale” and finally we did some motor skills exercises such as passing the ball to each other and using freely a tong to put the pompoms in a bowl. the children enjoyed coming to school! 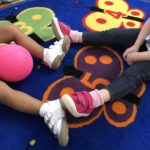 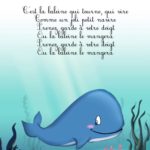 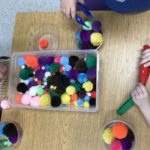 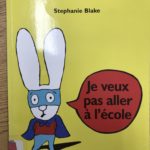 It seems that the children had a fun summer! Everybody came back to school with a positive attitude, ready to learn and to have fun!
You should have seen how proud they were once they realized that indeed, they had moved up and were no longer in the “ babies’ room”:)
New class means new teacher and … new toys! The children had a great time discovering their new surroundings. Everybody shared!

We read the story of Simon who doesn’t want to go to school… but got to love it once he tried it.
We also read : “ Tchoupi rentre à l’école”. After writing/ tracing our name, we cut, put back and glued the puzzle of the book cover.
We learned the first name’s song, colored the picture matching our gender and played games to remember who is a girl and who is a boy.
We spoke about our daily routine and the rules of the class/ school. 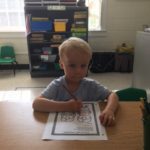 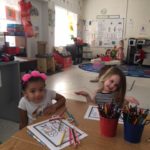 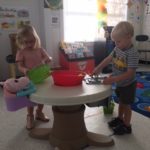 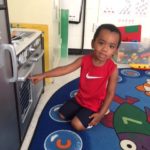 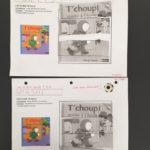 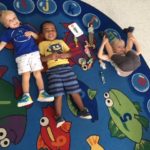 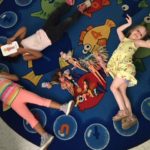 Hi, i’m Anne Cécile the new teacher of the 4s.

Every Friday all over the year the children are going to explain what were the most important things that happened during the week. I will also post some photos of their work on this blog.

So This week we have discovered the classroom, we particularly enjoyed the new kitchen with the babies.

We helped the teacher to sort our animals (dinosaurus, wild animals, insects and farm’s animals). Our teacher read us a book which was a bit scary. It’s called « Le mangeur de doudous ». Then we choose a doudou and we put colors on it just like the « mangeur de doudous » did.

We also began to write a book : the writing is finished but we have to draw the illustrations and to find a tittle. 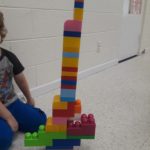 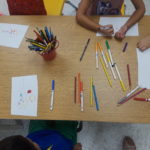 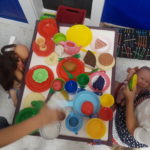 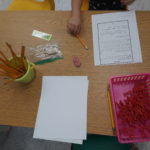 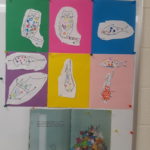 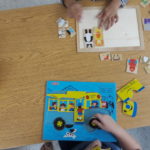